In this post I offer my thoughts on emotional and business aspects that are being impacted by virtual influencers, and create a field for discussion and voice questions, all in response to a previous Bloomberg Business post by Thuy Ong in Nov 2020.

One of the hottest trends in the influencer marketing industry nowadays is the appearance of virtual influencers. What even more surprising is the fact that they earn a seven-figure income per year, which is 252 times more than average workers in the UK in 2020. They also target social media platforms such as Instagram, Youtube, … which were previously pre-dominant by human stars only, and they are getting a lot of support from the audience. So, will this phenomenon do more good than bad to the industry in the far future? Is it okay that virtual influencers make money whilst humans are furloughed due to Covid-19?

The Emotional Aspect: what people need is a believable story

Despite virtual humans being computer-generated, they are given names, hobbies, even jobs. They experience human-related troubles of waking up early in the morning. They sing, dance, make music albums… they swim, do sports, play board games and video games… it’s all human relatable. Like a drama series whose visual effects throw viewers off, people still stay hooked to see what will happen next; basically it’s all thanks to good storytelling.

From the perspective of a 3D artist, virtual influencers don’t look real, at least it is the faces that are not human-like and sometimes fall into what is called “uncanny valley” (the consequences of attempting to replicate a human face unsuccessfully). Obviously, if it is an image of them covering their eyes with sunglasses, or a faraway photoshoot, virtual influencers look no less than a human being.

But, regardless the technical realism achieved in terms of a character’s look, virtual influencers are not physically living things, and with Lilmiquela we even have a confession straight from her virtual mouth: “I’m not a human being”. So I wonder why people still ask questions like “Is she actually a robot? Does that mean she’s real?”. Well, it must be “because we’re suckers for a good story”. 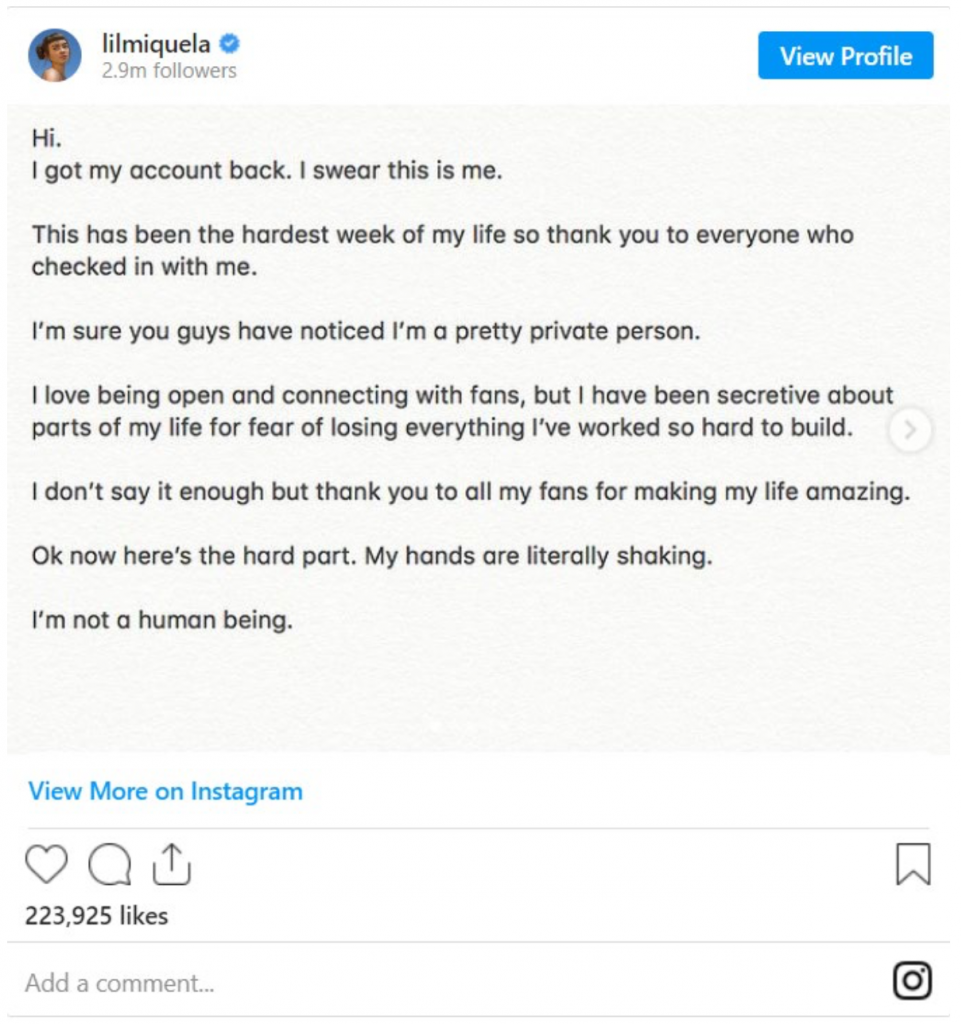 Escapism is a concept of self-distraction or self-relief from unpleasant reality via immersing oneself into a fantasy world in their minds. Idolisation is a concept of showing one’s admiration and adoration towards another superior being.

Concerning the Covid-19 situation, human socialisation is now very much like a taboo. Nonetheless, virtual influencers may be offering an path for those who are deep in the darkness of desperation. Exactly like human stars they bring joy and stories to their followers lives via social media, and here virtual stars are no less capable. They even (seem to) interact with real-world famous figures such as Shugga, Bella Hadid or The Chainsmokers, blurring the line between virtual and physical world. Whilst real-world entertainers are waiting for opportunities in hopelessness, the unreal ones seem to bringing hope back to the audience, preventing them from escaping reality altogether.

Virtual influencers even revive quite controversial conversation topics. People have been arguing with one another about the authenticity, manners, beauty or talents of these virtual humans; which replicates the same pattern human celebrities tend to create. To me it signals an opportunity for increased engagement of the audience, it creates discussions focusing on like and dislike which connects and disconnects groups of people, and brings back the liveliness of the human community.

The Business Aspect: it all starts with behavioral addiction

Having mastered the knowledge of how to keep users hooked, any crazy idea could have real business potential. According to Adam Alter from the book “Irresistible”, there are six ingredients to approaching user’s behavioral addiction: goals, progress, feedback, escalation, cliffhangers, and social interaction. Based on different situations, different ingredients will be in use.

Sometimes, behavioral addiction can be like a playground for social interaction with others. At other times, it can be an occurrence of a dramatic event. Unfortunately, “Knowing the interests and browsing habits of our young and tech-savvy player base”, means that manipulating their behaviours for profits has never been easier. 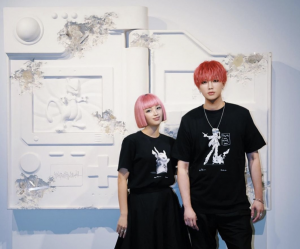 The fact that the virtual influencers “are cheaper to work with than humans in the long term, are 100% controllable, can appear in many places at once, and, most importantly, they never age or die”, is undeniably true. They give “brands greater control over messaging”, and “the risk of their brand ambassador misbehaving or causing a scandal by doing something that doesn’t match their values is pretty low” (Fernandes K., 2019).

To me, this raises a question: will these virtual influencers one day, replace humans? Well, that is a tough one to answer, but one thing for sure, they won’t disappear. In my view, the two entities should continue to co-exist and benefit one another mutually. This will eventually make a huge breakthrough in terms of monetisation within the industry. Another wave of already hot trends, such as implementations of AI techniques on the computer-generated influencers or collaboration between the virtual and real-world artists, could potentially happen. And in my opinion, that will be very interesting to see.

Because it is interesting,

Because it is different,

Because it is mind-blowing,

Because it is controversial,

As the virtual stars are benefitting our lives mentally and financially already, while being easily controlled by their creators, there is no reason why they cannot, in human stead, make money to continue, if not improve, our digital society.

This Covid pandemic has been, in fact, a great opportunity for virtual influencers to blend more seamlessly into our virtual lives, so that once everything returns back to normal, it will be hard to deny their existence and the impact they have had on us. Their existence has already influenced our lifestyles and mindsets. We have been getting used to seeing influencers in our social feeds every single day, and there is no doubt in my mind that sooner or later, instead of a discussion on whether it is fine for virtual stars to make money, the discussion will move on and focus on collaborations or competitions between them.

Petrarca E. (2018) Body Con Job Miquela Sousa has over 1 million followers on Instagram and was recently hacked by a Trump troll. But she isn’t real. Available from: https://www.thecut.com/2018/05/lil-miquela-digital-avatar-instagram-influencer.html [Accessed 09 January, 2020]