Fashion in the Metaverse I can see it, but can I touch it, or even smell it and would it even fit me. This is a question you probably ask yourself when shopping for fashion, maybe you don’t even care about it that much. But you have to admit fashion plays an integral role in our society and it has done for as long as humans have covered themselves up.

Who would have thought that covering our selves up to stay warm would evolve into the crazy world of cat walks, designer brands and a global reselling market which nearly every human on the planet has access to?

This industry which has already changed and advanced so much is now taking on another exciting but expected twist. From the average Joe to the head of a designer brand such as Gucci, it is clear to see how intertwined fashion has become with the digital landscape. The online shopping craze has made it beyond simple for the consumer to interact with fashion. A quick look on a website such as Asos or Depop and all one’s fashion desires are met. Another step forward for the fashion industry and society has begun. This is called The Metaverse.

How do these two worlds coincide and coexist? And do they?

The term first appeared in 1992 in the science fiction novel Snow Crash which was written by Neal Stephenson. The metaverse notion has taken more of a front seat view in the public eye in recent times, for example with the changing of Facebook Inc’s company name to Meta (as a derivative from the word metaverse). Recent advancements in Virtual Reality technology and entertainment also meant increased interest and excitement when the metaverse is discussed, be it by professionals or just the casual digester of technological news.

But let’s cut to the chase, what actually is it?

The Wrap.com, an American online news website covering the business of entertainment and media, describes the metaverse as “a virtual reality world where users can interact, game and experience things as they would in the real world. Using current AR and VR tech, they can immerse into this world and interact with overlaying objects and people in the visual projected in front of them.” Now with the metaverse defined, it is time to ask:

Fashion makes an imprint in the metaverse landscape, as it can be seen as merging both physical and digital designs. This merging can take the form of fashion brands collaborating with gaming companies to create skins for players to purchase and showcase them as a part of their identity, mimicking a relationship we already have with these brands in the physical world. An example of this is Louis Vuitton partnering with the creators of League of Legends to create a digitally exclusive range. The high-end fashion brand Gucci also collaborated with the popular game Roblox where they sold their Queen Bee Dionysus bag for 350,000 Robux, the in game currency, which equates to a little over $4k. Another company that wanted a piece of the action is Balenciaga, which teamed up with Fortnite to launch a range of skins.

Another huge step that is being taken is transforming and transporting the all famous Fashion Week model of advertising. The very first metaverse fashion week is starting on the 24th of March 2022, with the prestigious brand Hugo Boss being one of the faces of the project.

What all these collaborations have in common is that, although they were available digitally within the metaverse, they were also available in physical form – in stores as well as their in-game counterparts. Interestingly, the Gucci bag was even priced more expensively in the Roblox landscape than in the physical world. This release of both in game and in store items shows the changing landscape of companies and their relationship with tech and their diminishing hesitation to fully throw themselves in the deep end of this brave new digital world. 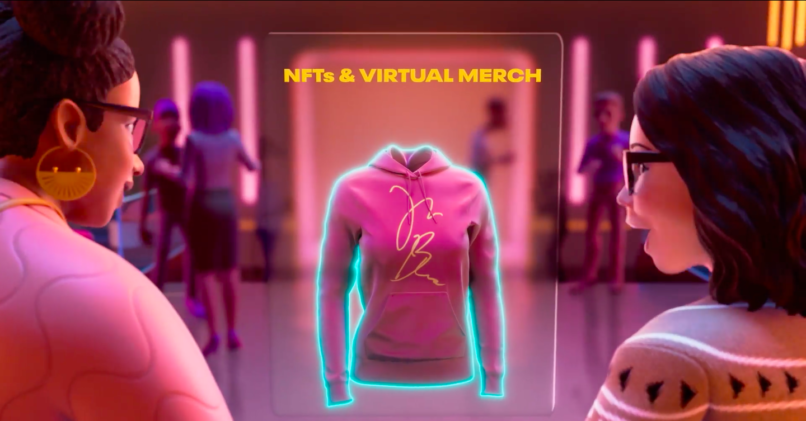 What about art that is only available in a digital format?

With the rise of NFTs (a non-fungible token) the idea of decorating your virtual space and identity has seen a boost in popularity, this runs alongside the hype surrounding the metaverse. With fashion companies investing in the digital market, it begs the question, how big might the purely digital fashion industry become?

I don’t believe we are anywhere near the reality of the film Ready Player One yet, which explores a society completely investing in living their day to day in virtual reality, but I do believe the fashion industry will grow inside the metaverse. Perhaps at the moment we are not yet at the point where these companies can see a purely digital future. Bernard Arnault who is the CEO of LVMH, a company that oversees the likes of Dior, Louis Vuitton, Fendi and Givenchy, stated in a recent presentation to investors that “it’s not our objective to sell virtual sneakers for 10 euros” so for many in the business there is still no rush towards the metaverse, but times might change.

A final call to action from me would be to keep exploring these new digital landscapes as I, alongside many others, believe the metaverse is the future. Wear that digital skin!